When Thailand is considered for a holiday, it’s most regularly identified with beaches and the glorious mayhem of Bangkok.  Indeed, the classic itinerary tends to revolve around a city break I’m the capital and somewhere with a beach by the sea, be it one of the many island destinations or on the mainland.  Yet what is true of most countries – that there is far more on offer than the obvious – is certainly the case with Thailand.  The north of the country is far from being off the beaten track, with Chiang Mai in particularly a significant tourist destination, but nor is it a place every visitor goes.  A city it may be, but the contrast with Bangkok is striking, both architecturally where the city walls remain extant, and rivers run through the heart of it.  There is a particular feel to the place itself for the new visitor, one which tends to stay in the mind.  It’s less all eco passing, and certainly more charming.  The city walls and moat are a constant reminder of the location near the Burmese border and the numerous wars between the two peoples. Yet the modern city retains that history while adapting both to normal 21st century life for those living there and as a magnet for ever increasing numbers of tourists from around the world.

There is plenty to see and do, from temples and historic ruins to the more modern nighlife such as the night markets, bars and restaurants.  For those who have experienced Bangkok, the compact nature provides what many consider an enhanced experience and a particularly Thai city break.

Although Chiang Mai was the capital of the northern Thai Lanna kingdom, it wasn’t the original choice.  The city name means New City, having quickly supplanted the original settlement of Chiang Rai.  The latter place remained important though, not least for its religious significance as the long standing location for the emerald Buddha now located in Bangkok.  Indeed, temple visits are still a major attraction, and not necessarily the older ones.  The White Temple nearby may be modern, but both the architecture and the truly astonishingly unorthodox modern artwork within make it a must see for anyone coming to the region. 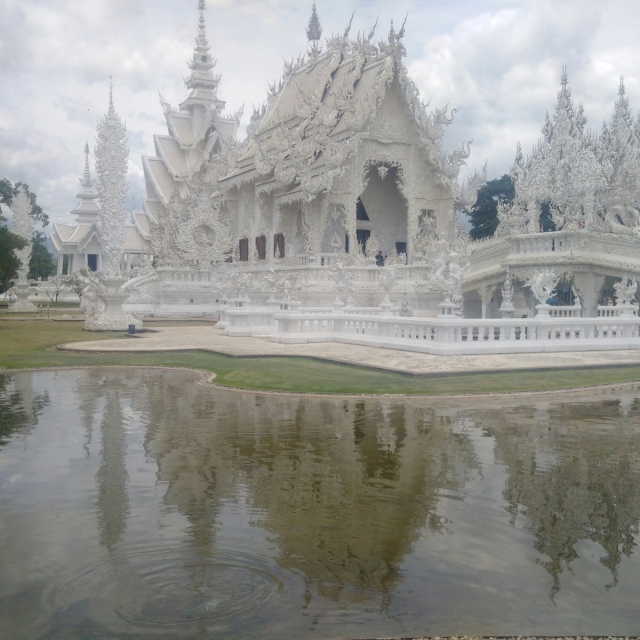 Outside the temple a sea of stone hands reaching out from the ground is unsettling in its imagery, while a legion of modern persons from George W Bush to Zinedine Zidane via Harry Potter bedeck the walls.  No photography inside is permitted, so a visit is required to truly grasp what is being witnessed.​

The mountains and hills beyond form the beginning of the area known as the Golden Triangle, notorious for illicit opium production.  Yet from a tourism perspective, the scenery is astounding and the views extraordinary.  Staying in Chiang Rai itself allows access to the nightlife, but moving beyond provides for relaxation and peace and quiet.  Sometimes that’s exactly what’s needed.

​​
From this area the borders of Laos and Burma are not far away.  The choice is where to go.  This time, it’ll be Laos, and that’s never a problem, because Laos is an extraordinary country.